We all know that a Solar Panel can be used to convert light energy to electrical energy. The amount of converted energy depends on the amount of light falling on the Panel. Generally Solar Panels are stationary devices which is fixed at a position. The produced electrical energy can be increased if we move the solar panel as the movement of the Sun. Here is a simple low cost Solar Tracker circuit which automatically moves the solar panel in the direction of Sun. The movement of the Sun is detected using two LDRs which are arranged on the Solar Panel in such a way that the intensity of light falling on it varies as the direction of Sun changes.

The output of the voltage comparator will be high when the voltage at non-inverting terminal (+) is higher than the voltage at the inverting terminal (-). Inverting (-) terminals of both comparators are shorted and connected to a variable resistor (RV1), which is used to set the reference voltage. Thus the sensitivity of both LDRs can be adjusted by varying the 10K pot shown on the left side of the circuit diagram. When the light falls on a LDR increases, voltage at the non-inverting (+) terminal of corresponding comparator increases and its output goes HIGH.

The DC Motor should be connected to the panel in such a way that, the rotation of motor rotates the panel in the direction of movement of  the Sun.

I M pursuing engineering from Kanpur....i have interest in electronics circuit designing...and so i want to share my little knowledge!!!!!! :-)

In most of our electronic products or projects we need a power supply for converting mains AC voltage to a... Read More

During the beginning of my electronics engineering journey I used to make PCBs at home using toner transfer method. Later... Read More

Recently, the scientists from the National Institute of Standards and Technology (NIST) along with an international research team delineated the possibility... Read More

Start Screen :   Microsoft is making one of the biggest upgrades through Windows 8. It replaces Start Menu with Start... Read More

Haven't you all noticed about the fact that sometimes while pressing a remote of a TV once, the channel shifts... Read More 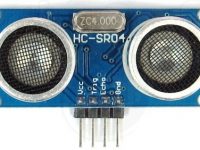 HC-SR04 Ultrasonic Distance Sensor is a popular and low cost solution for non-contact distance measurement function. It is able to... Read More