The thirst for new sources of energy is unquenchable, but we seldom realize that we are wasting a part of the electrical energy every day due to the lagging power factor in the inductive loads we use. Hence there is an urgent need to avoid this wastage of energy.

Before getting into the details of Power factor correction, lets just brush our knowledge about the term “power factor”. In simple words power factor basically states how far the energy provided has been utilized. The maximum value of power factor is unity. So closer the value of P.F to unity, better is the utility of energy or lesser is the wastage. In electrical terms Power factor is basically defined as the ratio of the active power to reactive power or it is the phase difference between voltage and current. Active power performs useful work while Reactive power does no useful work but is used for developing the magnetic field required by the device.

Most of the devices we use have power factor less than unity. Hence there is a requirement to bring this power factor close to unity. Here we are presenting a prototype for automatic power factor correction using PIC Microcontroller.

The 230 V, 50 Hz is step downed using voltage transformer and current transformer is used to extract the waveforms of current. The output of the voltage transformer is proportional to the voltage across the load and output of current transformer is proportional to the current through the load. These waveforms are fed to Voltage Comparators constructed using LM358 op-amp. Since it is a zero crossing detector, its output changes during zero crossing of the current and voltage waveforms. These outputs are fed to the PIC which does the further power factor calculations.

PIC 16F877A microcontroller is the heart of this Automatic Power Factor Controller, it find, displays and controls the Power Factor.. To correct power factor, first we need to find the current power factor. It can be find by taking tangent of ratio of time between zero crossing of current and voltage waveforms and two successive zero crossing of voltage waveform. Then it displays the calculated power factor in the 16×2 LCD Display and switches ON the capacitors if required.

When load is connected the power factor is calculated by the PIC microcontroller. If the calculated power factor is less than 0.9 then the relay switches on the capacitor. The relays are switched using ULN2003 which is basically a driver IC. ULN2003 consists of seven DARLINGTON PAIRS.
The current lead in capacitor compensates the corresponding current lag which is usually present in loads. Hence the phase difference between the current and voltage will be reduced.

The function powerFactor() will find the current power factor by using the Timer 1 module of PIC 16F877a. Power Factor may be fluctuating, so to avoid it we will find power factor more than one time and its average is taken.

Note : This is only a prototype of Automatic Power Factor Controller, for practical implementation you may need to make some modifications in the program and circuit. 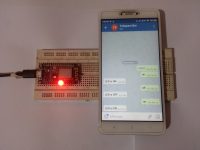 In this project we will control an LED which is connected to ESP8266 with a Telegram bot. Hope you know... Read More

In this tutorial we are going to make a weather station that will tell us temperature, humidity and heat index... Read More 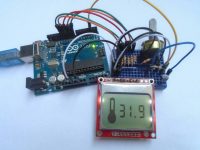 In this project, we are going to make a Digital Thermometer using Arduino Uno. We will use DS18B20 temperature sensor... Read More 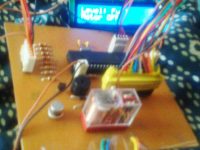 Here is a simple, versatile project which indicates the level of water and automatically controls it by using PIC Microcontroller. The Water... Read More 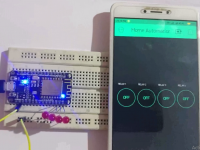 A home automation system is an automating the bulk of electronic and electrical tasks within a home. It uses a combination of hardware... Read More

We have already posted about a Water Level Indicator and Controller using PIC Microcontroller. Today I am presenting a very useful,... Read More 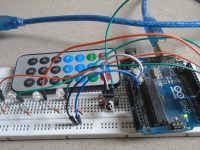 This article allows you to turn ON and OFF LED's using a cheap IR remote control. Here we used an available IR... Read More 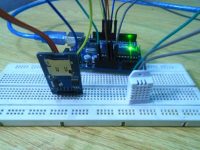 In this project, we are going to make a temperature and relative humidity data logger. Arduino is the brain of... Read More