A team ofengineers has created silicon carbide based amplifiers having applications in both aerospace and energy industries. The devices can take extreme heat even upto 600 degree Celsius.These integrated circuits are designed over a wide-band-gap semiconductor. According to Dr.Garverick, “Most semi-conductors are made out of silicon, but silicon will not function above 300 degrees Celsius, and there are some important applications above that range.” So his team started to use silicon carbide,which begins to act as semiconductors at high temperatures.

Engineers at NASA Glenn Research Center, in Cleveland, inovated these techniques used to manufacture such circuits. Team members at Case Western Reserve have used them to create complete circuits by depositing three distinct silicon carbide layers on top of silicon carbide wafers.These circuits are expected to replace sensors which are currently used in high-temperature applications.These circuits can experience considerable interference, which makes signals unclear and difficult to decipher. The physical enclosures and wiring used in the manufacture and installation of non-integrated sensors introduces additional error.

Integrating the amplifier and sensor into one discrete package and placing the package directly where data is being collected improves signal strength, clarity and produces more reliable information.

Some of its many possible applications include accurate monitoring and safer control over a jet engine, nuclear reactor or other high-temperature operations.The team has built a suite of circuits ranging from simple low-accuracy versions to more complex models that return far better data.Dr. Garverick said the team will continue developing the technology and believes that commercial production is about five to ten years away.

Most of us are working from home during this COVID-19 pandemic situation. I have personally struggled to debug some of... Read More

Ultrasonic Sensors are widely used for non-contact  proximity, presence and distance measuring applications. These devices work on a similar principle of sonar or... Read More

I²C or I2C is an abbreviation of Inter-Integrated Circuit, a serial communication protocol made by Philips Semiconductor (now it is... Read More

I hope that you already go through our tutorial, LED Blinking using Raspberry Pi. Detecting switch status is one of the... Read More

What is Virtual Ground ? As the name indicates it is virtual, not real ground. For some purposes we can consider... Read More

Here is a simple and interesting hobby circuit that can be made using the popular 555 timer IC. As you... Read More 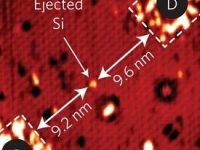 Australian and American physicists had developed a Single Atom Transistor, composed of an atom of phosphorous-31 isotope. They had demonstrated a working... Read More