A microprocessor is an integrated circuit (IC) which incorporates core functions of a computer’s central processing unit (CPU). It is a programmable multipurpose silicon chip, clock driven, register based, accepts binary data as input and provides output after processing it as per the instructions stored in the memory.

Block Diagram of a Computer

Why we need a Microprocessor ?

Thank you “B B DWIVEDI” for asking this question in the comment. So I thought of adding it here such that it will be helpful for all those who read this article.
A microprocessor is similar to our human brain, it can be trained to do anything. It can be programmed to do anything we want based on it’s instruction set and capabilities. Sometimes solutions are very complex, circuits also becomes very complex if we try to solve it without programming.
Here is my analogy. Imagine you want to make a big building. Usage of BRICKS will make the construction process simple and cost effective. And it will also give you the freedom to make the building in shape and size what you like. Instruction set in a microprocessor are the bricks which you can use to solve your problem. By using those instructions you can easily solve complex program.

How does a Microprocessor work ?

A processor is the brain of a computer which basically consists of Arithmetical and Logical Unit (ALU), Control Unit and Register Array. As the name indicates ALU performs all arithmetic and logical operations on the data received from input devices or memory. Register array consists of a series of registers like accumulator (A), B, C, D etc. which acts as temporary fast access memory locations for processing data. As the name indicates, control unit controls the flow of instructions and data throughout the system.

So basically a microprocessor takes input from input devices, process it as per instructions given in the memory and produces output.

Advantages of a Microprocessor

Here are some common terms that we will use in microprocessor field.

Instruction set is the group of commands that a microprocessor can understand. So instruction set is an interface between hardware and software (program). An instruction commands the processor to switch relevant transistors for doing some processing in data. For eg. ADD A, B; is used to add two numbers stored in the register A and B.

Microprocessors uses a clock signal to control the rate at which instructions are executed, synchronize other internal components and to control the data transfer between them. So clock speed refers to the speed at which a microprocessor executes instructions. It is usually measured in Hertz and are expressed in megahertz (MHz), gigahertz (GHz) etc.

Based on Word Length

Hope you read about word length above. So based on the word length of a processor we can have 8-bit, 16-bit, 32-bit and 64-bit processors.

RISC is a type of microprocessor architecture which uses small, general purpose and highly optimized instruction set rather than more specialized set of instructions found in others. RISC offers high performance over its opposing architecture CISC (see below). In a processor, execution of each instruction require a special circuit to load and process the data. So by reducing instructions, the processor will be using simple circuits and faster in operation.

This architecture is actually designed to reduce the cost of memory by reducing the program length.

There are some processors which are designed to handle some specific functions.

IC UM3561 is a CMOS LSI IC commonly used in alarm and toy applications. It is able to generate Police... Read More

In this era of increasing petroleum costs, the arrival of hybrid vehicles is inevitable. Energy consumption is rising... Read More

You may have face a number of situations where the images you captured gets blurred. Or sometimes you may miss... Read More 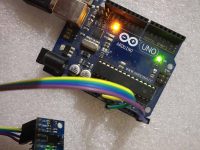 About MPU-6050 MPU-6050 is a chip manufactured by Invensense which combines 3 axis accelerometer and 3 axis gyroscope with an on-board... Read More 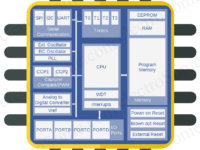 The term microprocessor and microcontroller can be confusing for those who are new to this field. I recommend you to... Read More