PIC to PIC communication will be needed in some embedded applications. We have two options to transmit data through transmission lines.

In parallel communication an entire byte of data is transmitted at a time. That is each bit has dedicated line. Thus for 8-bit data transfer we need 8 dedicated lines as shown above.

In Serial Transmission only one bit of a byte is transmitted at a time. There is only one communication line, thorough which bits are transmitted sequentially.

Transmission Systems are also classified into 2 on the basis of transmission synchronization.

When an electronic device transmits data to other there must be certain synchronization between them, ie the receiving device must have a way to know the beginning and end of each unit (byte) of data.

There is no separate clock line in this system. Transmitter and Receiver works on separate clocks. Start and Stop bits are also send along with data to identify start and end of a byte.

We can transmit data in three ways.

In Simplex Transmission, data is transmitted only in one direction.

In Half Duplex Transmission, data can be transmitted in both directions but to one side at a time.

In Full Duplex Transmission data can be transmitted simultaneously in two directions.

We don’t want to bother about configuring USART registers as MikroC Pro for PIC Microcontrollers have built-in library function to handle asynchronous communication.

The above circuit can demonstrate the PIC to PIC  Communication using USART. Here we are using Asynchronous communication. The switch status read by the first PIC is transmitted to the second PIC and displayed using LED’s.

Push Button Switch This tutorial is meant for beginners in the field of Atmel AVR programming. I hope that you already... Read More

Introduction In this article, we are going to interface a Soil Moisture Sensor with Arduino Uno. We will measure the moisture... Read More 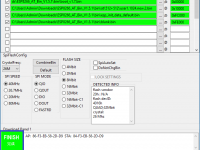 In the earlier articles, we have written our own program in Arduino IDE to access GPIO pins of ESP8266 or... Read More

I hope that you have already read the first tutorial of Hi Tech C, LED Blinking using PIC Microcontroller. In... Read More